1) Reference Boards have Board Support Packages (BSPs) that are maintained by their sponsoring companies and are included in our Jenkins CI system. Reference BSPs have snapshot builds that are made available daily and are fully validated with test results made available for every major AGL release.

2) Community Boards have BSPs that are maintained as a best effort by the AGL community based on upstream BSPs. Community Boards include some of the most-used Hobbyist boards such as the Raspberry PI or older automotive boards.

Note 1: A minimum build for the Renesas M3 ULCB board is available as a snapshot which does not include the graphics libraries. A full M3 ULCB binary is unavailable due to Renesas License restrictions on the graphics driver. Please see Quick Start guide for instructions to build your own image.

Note 2: VirtualBox / Vmware users can use the provided vmdk and import it. Be aware that you have to comment-out a line in /etc/xdg/weston/weston.ini to look like: #backend=drm-backend.so

Note 3: Intel Cyclone V upstream support was deleted after the Electric Eel 5.0.1 release. See SPEC-1383 for more information. We are working with Intel to restore support for the Cyclone V. 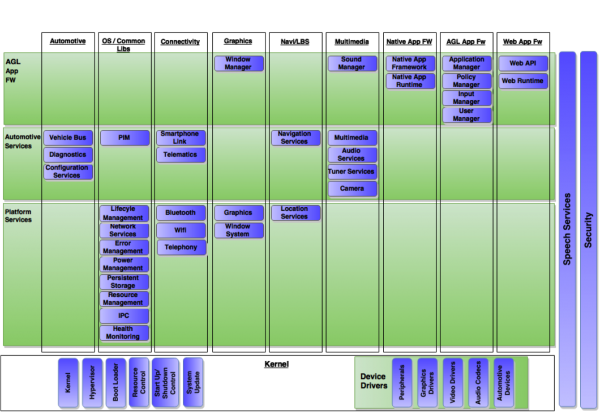