Contributing to the AGL Distro

The AGL community appreciates feedback, ideas, suggestion, bugs and documentation just as much as code. Please join the irc conversation at the #automotive channel on irc.freenode.net and our mailing list.

We use Gerrit to track and review changes to AGL software (i.e. projects at gerrit.automotivelinux.org).

The initial setup for gerrit is described very well on the Gerrit Tutorial from mediawiki . Just apply the steps likewise on git.automotivelinux.org .

Use cases were created to describe the desired usage for gerrit. Those may be reviewed here.

Developers may request a new project to be set up in the src or staging repository by submitting a Jira ticket. Ticket type should be a “Task”

An administrator will create the repo (/src/<name> or /staging/<name>) and also a gerrit group for the repo called “<name>-owners” .

Access control to gerrit is defined in this google doc spreadsheet.

The overall Gerrit workflow for a code change submitted to the project follows this diagram. 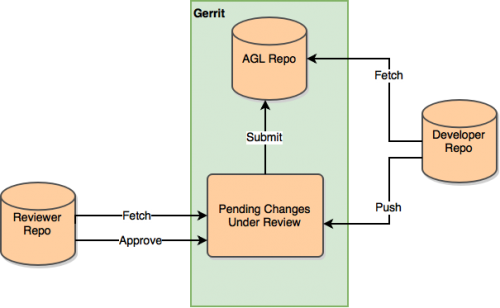 One can assume that requesting changes to be reverted will follow the same flow as those for new code and patches. Access to various functions within gerrit is granted according the roles defined here. 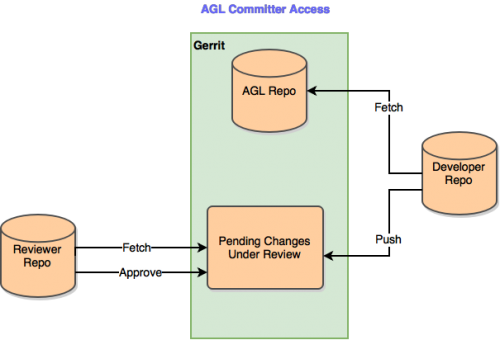 The ability to accept and merge changes into the AGL Repositories is reserved for role of AGL-mergers. AGL-mergers have all access granted to AGL-committers as well as the ability to +2 or -2 any proposed changes and submit those changes to the AGL Repository in gerrit. Self-review by AGL Mergers is generally frowned upon and AGL-mergers should only give a +2 or -2 after others reviewers after weighed in on the change. 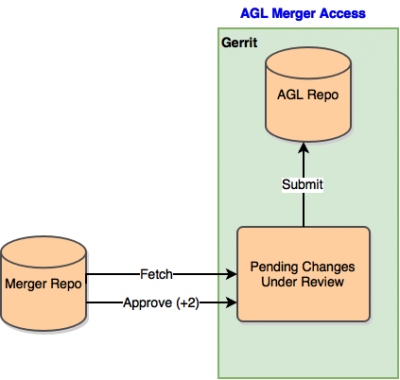 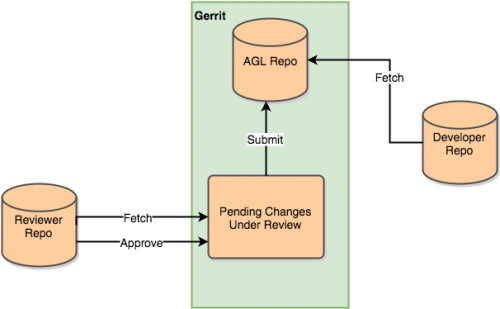 In addition to providing comments and suggestions for improvement, reviewers are encouraged to respond to changes with an overall +1, -1 type value. The meaning of these numbers is explained in the Gerrit documentation: Code review labels

Here is a brief summary of the values:

These values do not get added together by Gerrit, so two +1s do not lead to an automatic merge.

Changes can only be merged to the master branch once they have received a +2 and no -2. Only members of the AGL-Mergers group can give +2.

Prepare to push changes in Gerrit

By default the repo tool will have cloned the git repos with http for fetch and ssh to push.

Note: you still need to enter you ssh public key in Gerrit. You can find a HowTo here

Push changes for review to Gerrit

Please sign you commit before you submit the change (otherwise it will not be accepted by gerrit):

Find more details in these guides:

Notes on Use Cases