Discussions and Decisions During Phase 1 of the AGL Distro Project

Issue - How to create meta-agl layer. 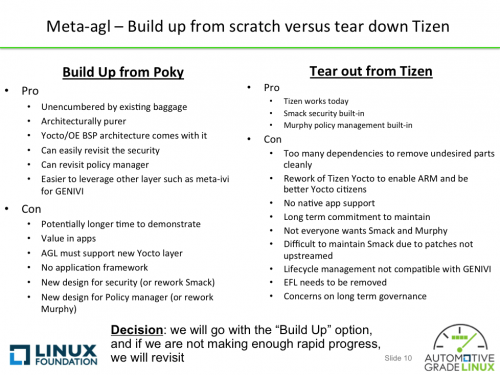 The decision was made to create meta-agl starting from Poky and meta-oe. Furthermore, we decided to use Yocto 1.7 for the initial release. As of now (early June 2015) Yocto 1.8 is the latest. We considered 1.6 because the latest Renesas BSP supports 1.6. Version 1.7 was chosen because meta-ivi which provides GENIVI compliance is currently using 1.7 and Renesas agreed to upgrade their BSP to 1.7

Issue - Use GitHub with GerritHub or use LF hosted Git/Gerrit 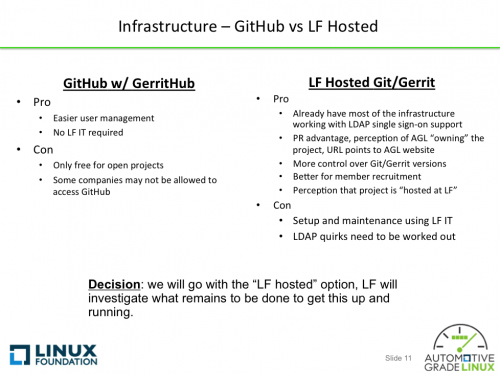 The decision was made to use LF hosted infrastructure.

In the end this will be fully documented by the final build configuration For now (July 2015). However, a number of intermediate discussions took place off of the mail list that should be preserved.

Phase 1 started with a list of all packages used in Tizen IVI 3.0 and GENIVI. The team sorted the list into three groups: GENIVI only, Tizen only, or Common Packages (early May 2015). During the Automotive Linux Summit on June 1 the team divided the list into subsystems and later into package groups per subsystems. The result of that work was used to drive the creation of the minimal AGL build in late July. That latest version of that spreadsheet can be seen here.

Discussed Wind River's position on maintenance of meta-ivi. WR would not welcome migrating packages from meta-ivi to a common layer such as the proposed meta-ivi-common. They are not willing to allow additional maintainers of meta-ivi, but will accept patch requests. They are not against adding new packages that may be required for GENIVI and AGL to be added to meta-ivi-common.

Jayan - we should be more specific as to what recipes_automotive covers since it would seem to be a broad topic. Michael Fabry is working on a proposal for this that should go out by the end of the week.

We need to set up the git server to have the proper access for committers. Walt will work with Tanikawa-san to make sure he can commit and then add the rest of the team. Also will send an email to mail list asking who would like commit access. Need procedure for making and approving requests.

Paul made a request from GENIVI PMO members to consider moving this meeting to a different time or day to avoid conflicts with GENIVI meetings. For now we will leave the meeting as is.

As far as in-meeting communication goes it seemed to help Tanikawa-san when we typed questions during the call. We will try adding a parallel text based component to the call on IRC to see if that catches on. It was agreed that we do not want to try an IRC only meeting at this time. I encourage everyone to confirm they can access Freenode IRC at #automotive prior to next week's call.

Tanikawa-san push initial build next week for QEMU Renesas can support Yocto 1.7. Munakata-san will talk to Stephen L. about getting this to Tanikawa-san

Automotive-recipes proposal in two weeks due to Michael F. vacation.

Discussed gerrit set up Simple set up for access control preferred similar to Paul's email on the discussions mail list. +2 for code reviews Clear code review criteria and guidance for accept or reject of code changes. Paul will find a suitable starting point from a different open source organization

1) Initial build on git. Tanikawa-san waiting for build to complete in the next few hours. Will be Yocto/Poky only. Build boots to weston prompt, Meta-agl has only recipe for the image and package group recipes placeholder. Only tested on Ubuntu QEMU x86 64 bit.

2) We will need developers to start building out the package groups once the initial build is pushed to gerrit. The plan for now is to a) Push the build to gerrit as is. b) Create a list of tasks that need to be done to complete package groups. Tanikawa-san and Ito-san will get together in Japan on Wednesday and put together the list. The task list will be published to the wiki page and sent to the AGL discussions mail list. c) Add the tasks to Jira to track these items to completion. Need to recruit members to own the sub teams and the tasks.

3) CI Framework - Paul working on the comparison of CI systems. Since the GENIVI tools team is looking at CI systems as well, we would like to try to use the same framework as GENIVI so the engineers do not need to learn different systems.

4) Paul will send out suggested process flow to the mail list.

Tanikawa-san has pushed his initial work into Gerrit based on Yocto 1.7.

Can now have the subsystem teams work on populating their package lists. Urgent need is for OS and common libraries.

Discussed the task list put together by Tanikawa-san, Ito-san, and Okubi-san.

Step 1 Identify the packages (on the package group list) that needs to be moved from core-image to AGL-core (Owner Tanikawa-san, to be completed by 7/28) Note that this is complete

Step 2-a: Identify the package group list the packages that needs to be handled by BSP. (Owner Tanikawa-san, to be completed by 7/28)

Step 2-b: This BSP package list needs to be reviewed (Owner Renesas. to be completed by 8/7)

By doing Step1 &2 we can identify the package that is very specific to each sub-system. Step 2-b Complete/Not Needed

Step 3: Identify sub-system team by August 7th. We need at least the OS/Common Libs/ Graphics/ Multimedia/ Kernel This is very critical, and we need them now.

Step 4: Create recipes based on the packaged identified by the Step1. Owner Tanikawa-san & Ibe-san, to be completed by 8/7

Step 5: The sub-system team to conduct a build by using the package lists identified at Step 1 &2. (Owner: Sub-System team, due by 8/19)

This needs to be completed by the end of August, which is the end of Phase 1.

So, as it looks, it is extremely critical to identify the Sub-system members. And, from this schedule, since “Step 5” needs to happen during Japanese companies summer vacation period (called OBon Holidays. https://en.wikipedia.org/wiki/Bon_Festival ) We need supports from non-Japanese companies on the Step 5.

The IRC log for the meeting can be found here. https://irclogs.baserock.org/automotive/%23automotive.2015-08-25.log.html

The IRC log for the meeting can be found here. https://irclogs.baserock.org/automotive/%23automotive.2015-09-01.log.html

The IRC log for the meeting can be found here https://irclogs.baserock.org/automotive/%23automotive.2015-09-16.log.html

Attendees: Walt, Michael, Jeremiah, Jan-Simon, Tanikawa, Christian, Louai, Ned, Jens, Nuohan Note that attendee list reflects only those who participated. There may have been other lurkers :)

The IRC log for the meeting can be found here https://irclogs.baserock.org/automotive/%23automotive.2015-09-22.log.html Topics:

The IRC log for the meeting can be found here https://irclogs.baserock.org/automotive/%23automotive.2015-09-29.log.html Action items: